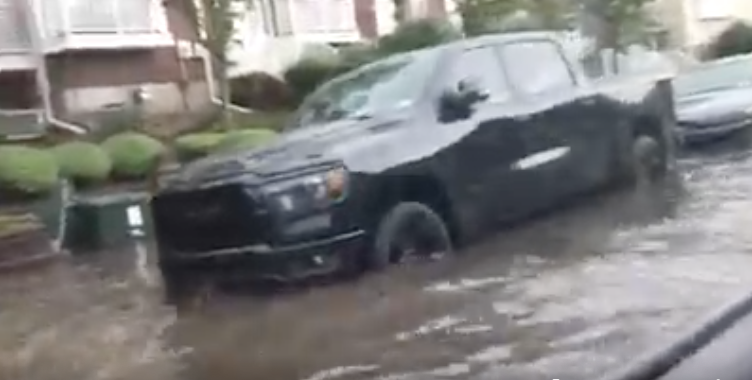 Recorded rainfall from the storm Friday afternoon was between 1.5-2 inches in an hour. Anything over 0.5″ in an hour causes urban flooding, as was experienced all over Perth Amboy yesterday. As predicted, the east coast climate change pattern is to dump extreme rainfall.  Climate change increases moisture in the atmosphere, creating greater downpours during thunderstorms and other heavy rain events (or snow). Perth Amboy residents captured incredible photos of the giant cumulonimbus (storm) clouds over our city yesterday that burst into a brief super soaker event that caused flooding.

As we saw yesterday, with flooding at the Perth Amboy Marina, Harbortown, Grant St and State St, among other areas of the city, our systems for draining and managing water are antiquated and ill-equipped to handle the new normal of these climate-driven, super-soaker rain events. We need to make investments to build greater resilience to protect against the impact of extreme weather.

In Perth Amboy, the Green Team works on solutions to build resiliency, by planting trees, adding plants, adding rain barrels to catch water so our sewers aren’t over capacity from the heavy rain. They promote green and grey infrastructure, which are water management approaches that use natural ways to prevent storm water from entering the sewer system, such as using a permeable material for a path, patio, or driveway to limit runoff produced by concrete or asphalt . This week Mayor Caba announced the City would participate in the Resilient NJ Project, which will develop flood risk and resilience solutions for the Raritan River and Bay Communities. Also, The Perth Amboy Civic Trust has been working to help Perth Amboy develop plans to address our antiquated sewer system and our CSO’s-the combined sewer overflows, which when the heavy rain happens, dumps raw sewage into Raritan Bay. The cost of addressing our sewer system with the CSO project is $341 million and is required by the NJ DEP. You can learn more about the city project updating the CSO’s by checking out the NJ Future Sewage Free Street and Rivers Project Fact Sheet on Perth Amboy.