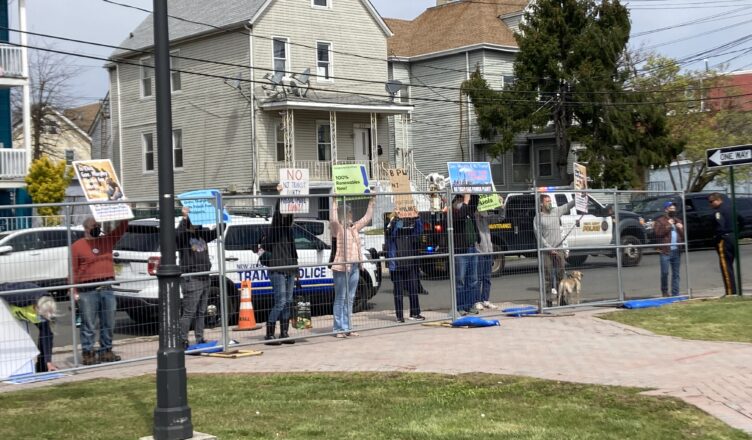 Protesters gathered at Perth Amboy’s historic train station, located just 2.5 miles away from the site where Competitive Power Ventures is proposing to double the size of their existing gas plant. Food and Water Water said in a press release that if approved, the power plant would become one of the state’s largest sources of climate-destroying greenhouse gas pollution, only further damaging the air quality in (surrounding community) Perth Amboy, which is already an overburdened environmental justice community. Food and Water Water said another reason they protested at the Train Station groundbreaking was to protest NJ Transit, the agency behind the plans for a similar gas-fired power plant in Kearny.

Food & Water Watch New Jersey Director Matthew Smith said The Murphy administration needs to take bold action in response to a climate reality dominated by increasingly destructive events like superstorm Ida, “Governor Murphy must follow through on his stated commitment to combat climate change and protect clean air for all New Jerseyans by rejecting plans for more dirty power plants, pipelines and other destructive and unnecessary fossil fuel projects in our state.”

Food and Watch Water is making a presentation in Perth Amboy hosted by the Green Team on Saturday May 14 at 2pm at the Jankowski Center, 1 Olive St.