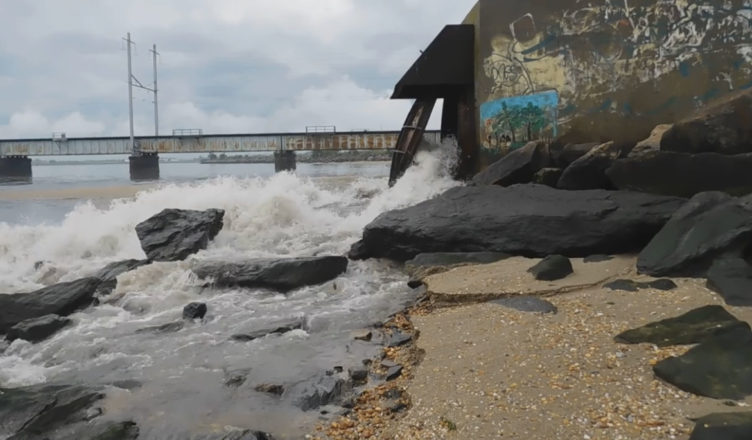 A Rutgers-coordinated monitoring program has been testing the levels of water safety for recreational use in the lower Raritan River, testing at 6 sites including one in Perth Amboy at the end of 2nd St. People fish, kayak, sail and jet ski in this area on the Raritan River. High levels of fecal bacteria have been found by the program’s water sampling. The water samples were tested for enterococci bacteria or fecal pollution  which live in the intestinal tracts of people and other warm-blooded animals. Sources of fecal pollution can include stormwater runoff, combined sewer overflows, improperly functioning sewer systems, pet waste, Canada geese waste, leaking septic systems, animal carcasses and runoff from manure storage areas.

Enterococci levels should not exceed the water quality standard of 104 (colony forming units) per 100 milliliters of water for a single sample. Enterococci levels at the six sites ranged from less than 10 to more than 6,000, and analysis of the data is underway. A 30-day average from August 15 to September 12 ranged from 156 to 960 – far above what government agencies consider safe for swimming, which is no more than 30.

Perth Amboy is not alone with this problem, the other  sites that tested high for fecal matter were Riverside Park in Piscataway, Rutgers Class of 1914 Boathouse in New Brunswick, Edison Boat Basin and Riverwalk, Ken Buchanan Riverfront Park in Sayreville, and Raritan Bay Waterfront Park in South Amboy.

Since May 2019, Rutgers Cooperative Extension of Middlesex County, the Lower Raritan Watershed Partnership and Rutgers University–New Brunswick’s Department of Ecology, Evolution, and Natural Resources partnered to collect weekly water samples at the six sites. The Interstate Environmental Commission analyzed the samples as part of a region-wide, volunteer monitoring effort.

You can find water quality test results for the lower Raritan River posted every Friday on the Lower Raritan Watershed Partnership website.