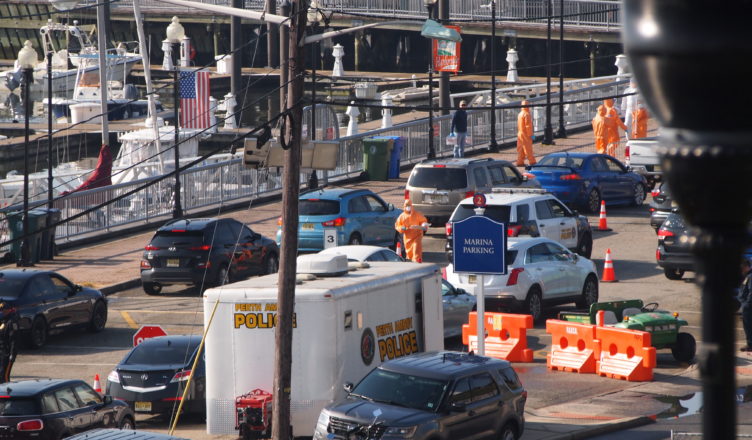 If you live on the Perth Amboy Waterfront or enjoy exercising there, boating, walking your dog there or bringing your family, you might be surprised to find that the City & JRMC used the Perth Amboy Harborside Marina as a pop up drive thru COVID 19 testing site. The pop-up testing site suddenly appeared this past Saturday April 25th and area residents had no idea. “Look what popped up outside my window” said one resident. “I guess I can’t walk my dog there, its ground zero” said another resident. “They should have given us advance notice said another resident, since there are elderly in the area.” Other residents were caught so off guard that they were exercising in Bayview Park while tests were being taken nearby by people in head to toe orange hazard suits.

JRMC sent out a press release and email saying there are no set dates and times scheduled for testing outside of their Hobart location. Patients are made aware of the dates and times. The JRMC website has info on registering to be tested.

Perth Amboy was declared a hot spot by Governor Murphy and then became the number one town in Middlesex County with positive cases (1485) and deaths (62) as of April 26th, even though Perth Amboy only has 8% of the county population.

There are no dates and times on the city website about COVID 19 testing at the marina. We asked the Business Administrator, the City Clerk and the City Communications representative if they would send information to the public to announce when the testing would occur, for their own safety. Hopefully they will do this to help the residents protect themselves.

Other drive thru testing sites are not near people’s homes or where people exercise. We want to know why the marina and why no information about times or dates were provided in advance to the neighborhood. We want to protect ourselves. One resident commented, “It is an example of poor communication by the administration and JRMC.” Council President Bill Petrick  said the council was not consulted on the marina becoming the COVID-19 testing site.

Neighbor residents know that we need testing, but think the neighborhood should be informed and they do have risk concerns since the area is surrounded by homes and parks where people exercise.

Open communication is crucial, so there is no disinformation.