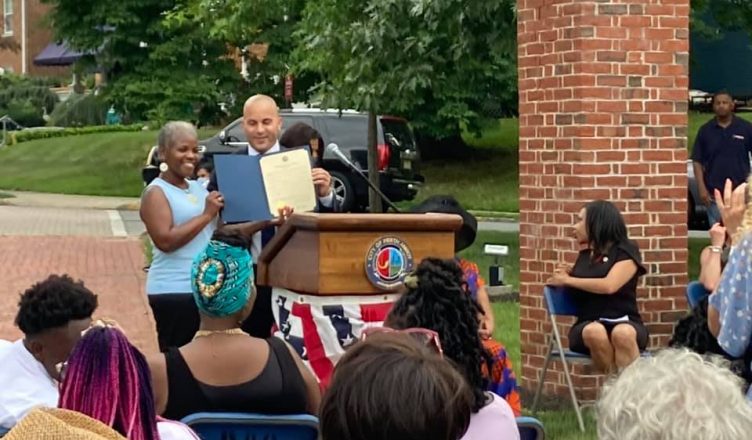 On June 19th at 3pm the City of Perth Amboy held its first Juneteenth flag raising ceremony at City Hall Circle. Juneteenth celebrates the end of slavery in the US, when on that day in 1865 enslaved people of Texas learned that slavery had been abolished and that they were free. Juneteenth was made a state holiday by NJ Governor Murphy in 2020 and became a federal holiday by President Biden this June 2021.

Opening prayer was offered by Reverend Donna Stewart, President of the Perth Amboy NAACP. A Proclamation of Juneteenth Day in Perth Amboy was given by Mayor Helmin Caba to Celebration of Freedom event organizer Jeanette Wilson Perry. “Juneteenth is the oldest national celebration of the ending of slavery in the United States. It took from June 19, 1865 to June 15, 2021 for Juneteenth to be recognized as an National Independence Day. One day we will celebrate as a nation One Independence Day!” said Jeanette Wilson Perry.

Endasi Lukoma, NJ Orator, Perth Amboy Chapter, presented the history and symbolism of the Juneteenth Flag, which represents freedom and justice for Black Americans and the importance of African American history.

John Kerry Dyke, Perth Amboy Historian, talked about slavery in NJ, that NJ was the last state in the north to outlaw slavery. He described Perth Amboy’s evolution from a port of the slave trade to a stop on the underground railroad to the home of the first Black voter in the United States under the Fifteenth Amendment. Secretary of State Tahesha Way described the resilience and strength of the Black Community for all that had been endured and the challenges still facing today.

The presentation and raising of the Juneteenth Flag was performed by the Perth Amboy ROTC.