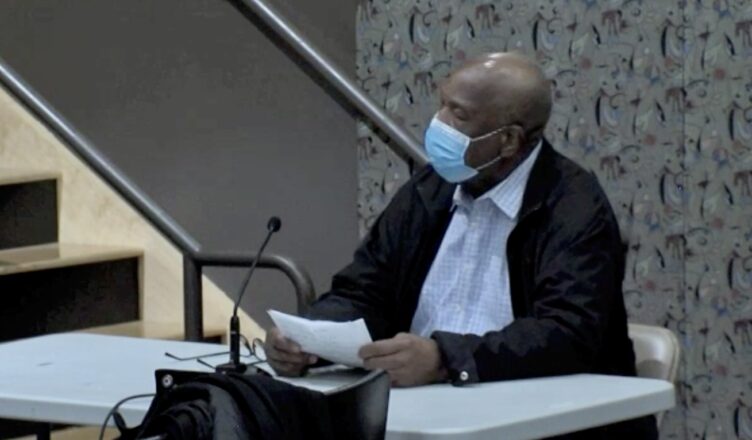 Perth Amboy community leaders are asking the Perth Amboy City Council to create a De-escalation Advisory Council designed to build mutual respect between the police and the community by ensuring de-escalation training and other de-escalation policies are brought to the attention of the City’s leadership.  Evidence shows that it will help to reduce avoidable incidents and injuries for Perth Amboy residents and police officers alike.

The NAACP, Frontline Youth, the Perth Amboy Civic Trust, and Bob McCoy, member, YMCA Board of Directors called on the Perth Amboy City Council to introduce the De-escalation Advisory Council Ordinance, which was already presented to the Council, at its upcoming meeting and to schedule a special meeting, so that this timely police reform initiative can be adopted this year. (pictured of Nov 23 City Council Meeting.)

This new Advisory Council would recommend to the Mayor, City Administrator and Police Director, evidence-based policies that have been proven to be successful in similar cities, that improve new recruit screening, training, reporting and any other actions or practices that enhance de-escalation and the continuing improvement of the Department’s “guardian” culture; conduct public hearings to receive evidence-based, best practice input from individuals, including police officers; and review an annual de-escalation performance audit that shall be provided by the Perth Amboy Police Department to report progress on any policies or practices adopted, or actions taken, to improve the de-escalation capabilities and performance of the Department.

The 11-member Advisory Council would be comprised of appointees of both the mayor and the city council and include 4 youth members (2 fifteen to twenty and 2 twenty to thirty years old).  The police department would have an ex-officio representative on the Advisory Council.

“This ordinance will directly improve and impact the lives of all Perth Amboy residents by allowing youth leaders, along with veteran leaders, to actively engage in the fostering of a relationship of mutual respect between the Perth Amboy Police and the community,” said Samantha Castro, Leader of the Frontline, which organized a peaceful protest of over 1,000 Perth Amboy residents. “It allows all Perth Amboy citizens to be heard, understood, and above all be safe.” (Samantha Castro pictured presenting at the Nov 23 Council Meeting)

Donna Stewart, NAACP President, (Perth Amboy and Woodbridge Branch), said, “We must act now to take this commonsense step to ensure that force is only used as a last resort after de-escalation options have been exhausted.  That is what establishing this Advisory Council gives us the tools to do, protecting community members and police officers alike.”

Bob McCoy, member of Perth Amboy’s YMCA Board of Directors and Leader of the Justice, Equity, Diversity and Inclusion(JEDI) group initiated by the YMCA, said, “This is the moment in which Perth Amboy must stand up for Police Reform and adopt a De-escalation Policy that provides specific and measurable guidance for the use of force. We must adopt the Citizen De-escalation Advisory Council Ordinance now.”

Harry Pozycki (pictured presenting at the Nov 23 Council Meeting), Perth Amboy Civic Trustee and Founder of The Citizens Campaign, said, “Perth Amboy civic leaders have come together to advance an evidence-based solution that will build mutual respect between the police, our youth and the community at large.  It is time for the Council to adopt it.”