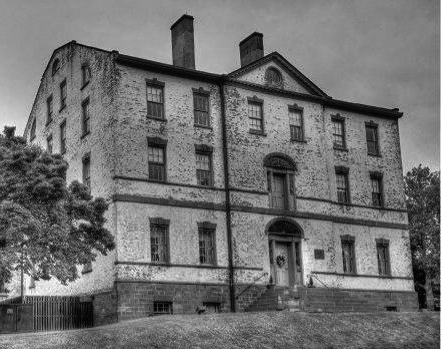 Proprietary House, located at 149 Kearny Ave in Perth Amboy NJ is haunted, if you didn’t know.  Researching the house you will find its on many lists of NJ haunted places. Its been featured many times on the program Ghost Hunters and the house has offered ghost tours for years.

I have had 3 experiences at the house that make me a believer.  I sat in when the TV show Ghost Hunters interviewed people who had experienced ghost activity in what is NJ’s Royal Governors Mansion, the former home of NJ Royal Governor William Franklin, who was arrested on the steps of the house during the American Revolution. Son of Benjamin Franklin, he was disowned for not joining the revolution. The stories told by current residents were too good. Why would regular people working in offices in the mansion be making this creepy stuff up?

Then, I went on a Halloween ghost tour of  the house led by a psychic, Jane Dougherty. During the tour, my friend Eddie Shots who was with me claimed that it felt like the hand of a child was tugging at his shirt. Later, I got a job working for the Jewish Renaissance Foundation, a local nonprofit that has office space on the top floors of the house. I was given a desk in the attic on the fourth floor.  One day I was under my desk  unplugging my computer when I found an old fashioned toy in the back area of the cubicle.  No one knew where it came from.  Perhaps these were hauntings by the children who died in the house.  The house has had many residents in its many lives which many contribute to its paranormal activity. It has been the NJ’s Royal Governors Mansion, a popular luxury resort hotel called The Brighton, the home of millionaire Mathias Bruen, a flop house with rumors of prostitution, a retirement home and currently a museum and offices.

On Oct 13 and 14, the Proprietary House Association will conjure the ghosts of the house and take you on a haunted history tour through centuries of the creepy mansion. Tours are at 7pm and 8:30pm for $15. This is a group known for their reenactments and love of history, so you are in for a treat. Featured stops on the tour are a former dungeon during the Revolution and a haunted staircase that was the scene of a murder. The Home News Tribune listed the Haunted History Tour as  a top thing to do for Halloween and I couldn’t agree more. For details about the tour visit Proprietary House on Facebook and their website