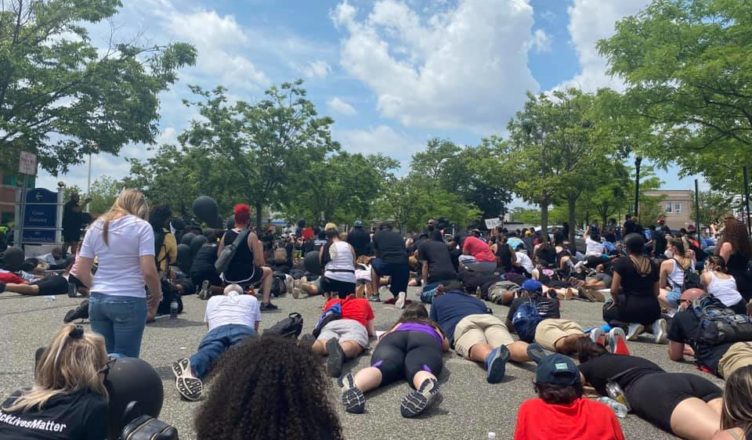 On Saturday June 6th, a massive crowd in Perth Amboy peacefully protested against police brutality and racism. It is estimated that 1000 attended the protest to honor George Floyd and countless other Black victims of police brutality and to demand justice. Many protestors held signs or wore shirts saying Black Lives Matter and Justice for George Floyd. Protestors rallied at Perth Amboy High School and then marched to City Hall. It began at 1pm at the high school when the huge crowd heard from Frontline NJ Youth organizers, a group dedicated to the fight against systemic racism and police brutality. Frontline NJ Youth organizers talked the need for police body cams to be on during all types of duty, the need for community review boards, the elimination of a militarized police force and a task-force to address racism in schools. Then they led the march through the city into downtown, stopping at the Perth Amboy Police Department, where participants took a knee or participated in a lie in for 8 minutes and 46 seconds, to represent the amount of time that the police were kneeling on George Floyd’s neck. Perth Amboy Police Officers participated by taking a knee.

Frontline Youth NJ organized the march in coordination with the City of Perth Amboy and the Perth Amboy Police Department. The protestors arrived at City Hall and gathered in the circle for more speeches. “If you want to make a difference and want your voice heard, register to vote! Run for office and create change” said Pastor Danielle Brown-Cathedral International, who is also a Perth Amboy School Board Member. Ruby Bonilla described the protest as a beautiful demonstration and felt very proud of her hometown “who was able to come together and organize an amazing protest and bring a message of justice and unity in the face of so much pain.”

More than 100 protests against police brutality and racism took place around NJ this week alone, with thousands of people attending, almost all peaceful. Middlesex County NJ had Black Lives Matter protests in New Brunswick, Carteret, Old Bridge, Sayreville, Perth Amboy, Woodbridge, Highland Park, Edison, South Brunswick, North Brunswick, South River, South Plainfield, Dunellen, Middlesex and Piscataway. CNN reports that protests have been going for the past 13 days across the country and world, and are only growing in size. Governor Murphy has been tweeting Black Lives Matter.

Perth Amboy Now stands in solidarity with the African American Community, Black Lives Matter, & everyone protesting the horrific murder of George Floyd and countless other victims of police brutality. Together we must fight to end systemic racism.