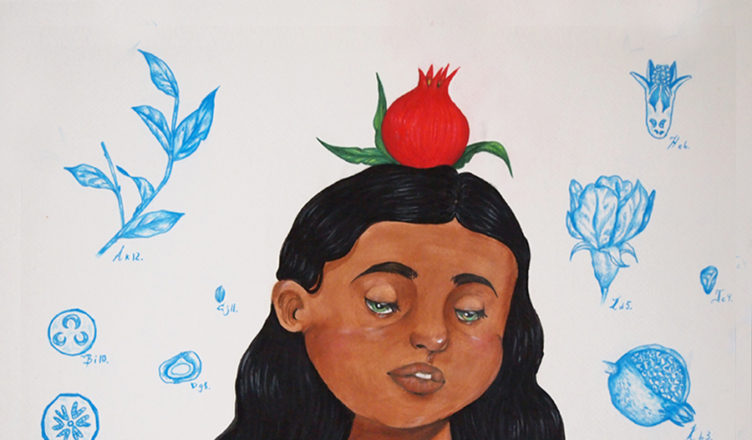 I first saw Perth Amboy artist Christopher Ramirez’s work at the Red Art Show held annually around Valentine’s Day at the Perth Amboy Gallery Center for the Arts.  His piece was a mixed media illustration of a big eyed, chubby cheeked girl with heartstrings exposed, called “How to Fix Love.”  It was really cool.  I became a fan. Then I saw his artwork on a flyer for the first Perth Amboy Waterfront Arts Festival. It was his signature illustration style girl character, with a fish flapping on her head.   I began following him on Instagram to keep up with his new works.

The following is Chris’s artist statement. “Christopher Ramírez is a Dominican born artist. He currently lives and works in Perth Amboy, NJ. His work features wide-eyed children that reflect on social and political topics. Nature and his Dominican roots are the main sources of inspiration for the artist. His works range from 2D mixed media paintings to polymer clay and resin sculptures. Chris describes his artworks as “Contemporary illustration,” artworks that combine the whimsical and sometimes cartoon-like essence of illustration with the abstraction and complexity of contemporary art.” One of his influences is artist Mathew Barney, known for his experimental work in sculpture, photography, drawing and film.

In March, I attended Chris’s solo show at the Perth Amboy Gallery titled PREFACE. HIs show’s pieces celebrated his Dominican Culture and were a silent protest of problems facing our world, like climate change and the deterioration of values. The show was in three rooms, one room of all chubby cheeked characters, like a garbage patch kid and a chubby faced kid covered in tattoos.  Then another room was transformed by his love for interior design with ornate black felt designs on lime green walls,  and then a main room was decorated with plantain leaves and featured pieces of his art hung in “found frames.”

One piece I fell in love with was of a girl surrounded by botanical illustrations with a pomegranate on her head, called “Dissected Pomegranate.” Chris explained to me that the botanicals are there to inform the viewer about the pomegranate, the process of how it grows from the seed to a fruit. He was inspired by the art film the Color of Pomegranates. At this year’s Waterfront Arts Festival, his piece “Mangu” was featured on the front page of the Home News Tribune and his work sold out at the festival. He is a person to watch. Stay tuned for upcoming show announcements.