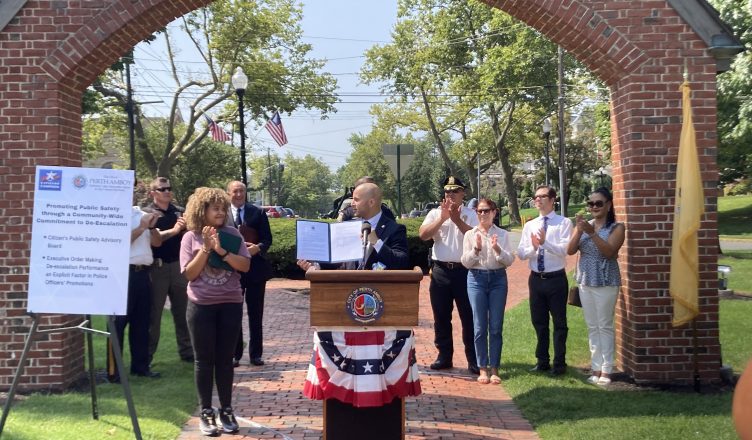 August 11 2021 Perth Amboy NJ- At a press conference at City Hall Circle, Mayor Helmin Caba signed an ordinance establishing the Citizens Public Safety Advisory Board and issued an Executive Order that requires de-escalation performance in accordance with the de-escalation training provided to Perth Amboy Police Officers, be an explicit factor considered in officers’ promotion decisions.  This reinforces Perth Amboy Police Department’s commitment to developing police officers that are “guardians” of public safety and the community. Mayor Caba said, “These measures commit Perth Amboy to a comprehensive and continuing community wide emphasis on de-escalation as key to public safety.”

The Citizens Public Safety Advisory Board is a result of work by Frontline Youth, who organized a 1000 person peaceful protest march in Perth Amboy in honor of George Floyd, meeting with leadership of the City’s Police Unions to discuss ways to move Perth Amboy forward and address de-escalation. They forged a partnership to work on public safety de-escalation on an ongoing basis. Police and protestors will serve together on the Citizens Public Safety Advisory Board in a continuing search for de-escalation best practices for the city.

The Perth Amboy Civic Trust played a crucial role in bringing all parties together to learn about and work on implementing best practice solutions for Perth Amboy. The Raritan Bay YMCA and Perth Amboy NAACP also played important roles in bringing people together to move the City forward to address public safety and de-escaltion.

Samantha Castro leader of Frontline Youth spoke at the Press Conference. “These measures will directly improve and impact the lives of all Perth Amboy residents by allowing youth leaders, along with veteran leaders, to actively engage in improving our City’s public safety and will foster a relationship of mutual respect between the Perth Amboy Police and the community,” said Samantha. “It allows all Perth Amboy residents [citizens] to be part of the solution!” The Perth Amboy City Council unanimously voted to support the creation of the Citizens Public Safety Advisory Board. (watch video)

Harry Pozycki, Perth Amboy Civic Trustee and Founder of The Citizen Campaign also spoke at the press conference. “I commend Mayor Caba for his leadership in issuing this executive order making de-escalation performance an explicit factor in police officers’ promotions and for his strong support of establishing the Advisory Board that will keep the focus on de-escalation” said Harry Pozycki.  “His actions combined with those of the leaders of the George Floyd march, the City Council and the Perth Amboy Police Department, demonstrate that we need not be captives to a choice between opposing and supporting the police. We can work together to achieve the best in 21st century public safety.”

Mayor Caba was also joined by Perth Amboy Police Chief Larry Cattano, who said he was committed to working together with the public and listening to concerns to achieve the best public safety for Perth Amboy.