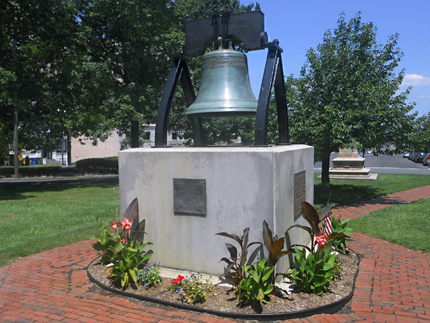 In 1950, the US Department of the Treasury had cast 55 full size replicas of the Liberty Bell to give out to US states, territories of the US and the District of Columbia. The home for the New Jersey Liberty Bell replica is Perth Amboy, NJ and can be found at City Hall Circle, 260 High St. Perth Amboy was chosen as the home for the New Jersey Liberty Bell because of its historical significance as the East Jersey Capital during the Revolutionary War. The Liberty Bell will be rung on Monday July 4th for Perth Amboy’s Independence Day Celebration. The bell is rung 13 times at 2pm, one ring for each of the 13 colonies.

The Perth Amboy Independence Day Ceremony on Monday July 4th begins at 11:30 am with an Independence Day Reception at Proprietary House, the Royal Governor’s Mansion from the original 13 colonies, at 149 Kearny Avenue.

At 12:30 pm at City Hall Circle, 260 High Street there is a Colonial Cannon Firing along with a performance by New Jersey Fife & Drums, who wear uniforms that would have been worn by the field musicians of the 2nd NEW JERSEY REGIMENT from 1775 during the war for independence. There will also be a reading of the Declaration of Independence. At 2pm the Color Guard of the New Jersey Society of Sons of the American Revolution will participate in the annual liberty bell ringing ceremony. The society are direct descendants of citizens who participated in the American War for Independence 1775.