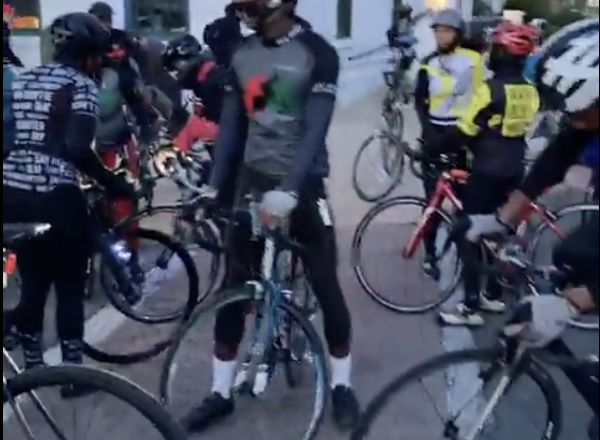 On Monday April 26th, 70 bike riders from across the state protested outside City Hall while the Perth Amboy City Council met and reviewed the Perth Amboy Bike License Ordinance at the caucus meeting.

The bike groups protest and the City Council’s review of the bike license ordinance were in response to the Saturday April 17 arrest of a Black teen by Perth Amboy Police over a bike license that was captured on video and viewed 5 million times, trending on social media outlets. The video shows teens on bikes surrounded by many police cars and officers, then getting a safety warning from an auxiliary police officer, then an escalating situation where a different officer shows up, confiscates the bikes from all the teens and arrests one Black youth, handcuffs him and puts him in a police car. It has been called by police experts the best and worst of community policing. NJ ACLU Director Amol Sinha Tweeted on Apr 19 “This is Perth Amboy, NJ. Are the police really arresting kids over bike registrations? Does it really require this many officers to address whatever situation this is? Police CANNOT continue to be our response to EVERYTHING.”  The ACLU tweet lead to the Middlesex County Prosecutors Office responding with an investigation into the arrest of the teen.

New Jersey Bike & Walk Coalition Executive Director Debra Kagan was interviewed in the news regarding the Perth Amboy bike incident and said “Licensing bicycles does not work. Safety is one thing, but licensing does not address the safety issues identified in the Perth Amboy incident. It creates an opportunity for discriminatory enforcement…it is not going to solve the safety of riding in the streets.”

Many news stories have come out about the incident, detailing how Black people bear the brunt of traffic enforcement and how there is a racial profiling problem with bike license laws.