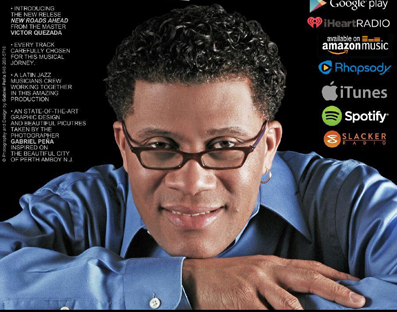 Victor Quezada is a cherished Perth Amboy jazz musician. This Thursday July 14 from 6:30-8:30pm he will be headlining the Mayor’s Concert Series in Bayview Park with his seven member Victor Quezada Jazz Band. He describes his music as smooth contemporary jazz and latin jazz. A saxophonist, he also sings and writes songs.

His performance will include songs from his new release, called New Roads Ahead. “Each tune is different and something new” he said of the seven-song album, including  ballads, latin jazz, and bossanova mixed with jazz. The album features two contemporary jazz originals “Let it Rain” and “Victor’s Touch.” Explaining his album title, Victor said “musically speaking, there is more to come from me.” The album artwork features beautiful pictures of Perth Amboy taken by photographer Gabriel Peña. The cover is a photo of Penn St and the back is a photo of the waterfront.

A Perth Amboy native, Victor Quezada had for many year been the star performer at the popular Blueberry Jazz Festival held annually in Bayview Park. Now, he is pleased that the City has continued the tradition of music in the park and has expanded the offerings to concerts every Thursday in July and August. “It brings the community together and is a really positive thing” Victor said. “I am happy more musicians get an opportunity to perform in Perth Amboy.”

You can check out the music of Victor Quezada on Spotify, Goggle play, iTunes, Amazon Music. Albums will be for sale at the concert.